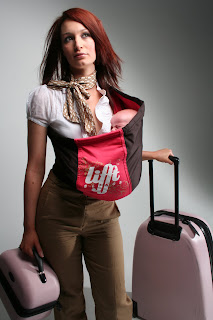 When I was asked to review the Lifft sling, I had no preconceptions. Ultimately, I thought that all slings were the same, and were destined to leave me with backache and a rather overheated wriggly baby. When my baby was newborn, I thought a sling would be the answer to all my problems. I thought that I would breeze around the house with baby happily in tow. Alas, after trying the Close carrier and the Wilkinet slings I thought that that would be the end of any babywearing for me. As a member of the ABM (Association of Breastfeeding mothers) I had read so many stories of positive stories of babywearing, which left me feeling frustrated when the slings I used didn't work for me. Too many fiddly strings and a wriggly baby was a nasty combination.

With my first son I didn't do any research, just bought the first sling that I found which was the Wilkinet sling - which was the worst thing I could have done. Struggling with the strings was enough to put me off straight away, and I never tried again until my second son.

Desperate to give slings a second try, I made sure I done my research the second time around. It was a tough decision - I couldn't make my mind up between the Close Carrier and the Lifft sling. In the end I went for the Close carrier because of the fact that I wanted me and my husband to be able to use the sling. The Lifft sling works specifically on sizes. I hated the Close carrier.

Anyhow, I received my Lifft sling and it looked very trendy with the Lifft logo emblazoning the front but I was very dubious and was holding out no hope of it actually working. That was when I was very pleasantly surprised!

I couldn't believe the simplicity of the design and how this design worked so well! There was no messing around; baby was in there within a few seconds. The instructions were easy to understand and baby was instantly contented. This was such a relief for me as I suffer with a curvature of the spine which made my back ache terribly after carrying my baby throughout the day. This was like an instant cure to my problem and my son seemed to love the closeness.

Because of my son's age (10 months) we could only test out the side position, I just wish I had tried this sling earlier.

What do I feel is different about this over other slings?

Before actually testing out the sling, I would have complained about the fact that a partner/husband wouldn't be able to wear as well. Now I have used it, I understand the way the sling operates and because it is so easy to get on and off it just makes babywearing bliss.

To roundup, my three favourite things about this sling:
And I loved the fact that when my son fell asleep on me with the sling, it didn't even wake him up when I removed him from the sling! Thanks to Lifft I have now found an element of freedom that I didn't know existed whilst having a baby! Thank you!

For more info see Lifft
Posted by Sarah Cooper at 03:05