From the minute you put Zumba Fitness Core on you will feel enlivened and invigorated by the fantastic selection of music; all the songs are amazingly upbeat and will make you feel glad to be alive. 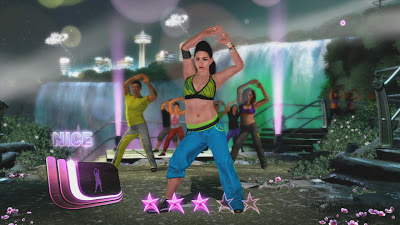 I have to admit I haven't done any fitness related things for around 4 years; I used to have a treadmill and go on it daily but since having my youngest child that's a thing of the past. I'm afraid I lacked motivation; that was until I got my hands on this game....

'Zumba' for those of you who are as clueless as I was up until a few weeks ago, is described as a Latin and International dance fitness programme.  The choreography incorporates hip-hop, samba, salsa, mambo, merengue, soca, martial arts, Bollywood and belly dancing.  I first became aware of Zumba through Facebook when I heard my friends raving about classes they had attended so I was intrigued to see what all the fuss was about.

The first day I received the game I was dressed in my usual clothes of a long-sleeved top, jeans and boots; I turned the game on just to see what it was like, not intending to play it there and then, but the music was so addictive I had to get up and dance straight away.  Amazingly, because the music was so upbeat and involving it didn't feel like I was doing any strenuous fitness regime; that was until the sweat started to pour off me.  But still that didn't put me off because the great thing about dancing is that it doesn't feel like work; it's just so enjoyable.  Eventually I had to get changed in to a shorts and t-shirt as I was enjoying myself so much and I spent 20 minutes on it before I totally wore myself out.  (I know, I know! I need to improve my fitness,  but not too bad for a first attempt). 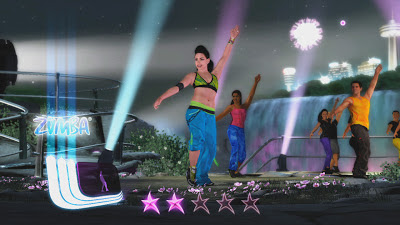 I find the game totally empowering; it makes you feel like you are some amazing dancer! Not only are you doing a great form of exercise but you are learning to dance too.  My personal favourite was the Bob Marley 'Jammin' song.

A feature I liked about the game was that the small screen on the bottom left told you whether you were performing the moves correctly, so the more moves you done correctly, the higher your overall score at the end.  It was nice having a goal to aim for and seeing your dance performance improve with practice. 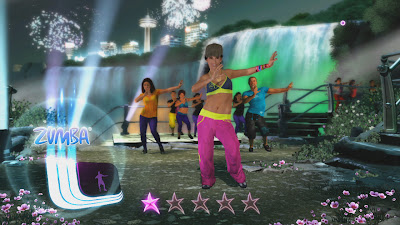 The Zumba Fitness Core game is fantastic for me as the 40 new routines aim specifically to sculpt your abs; since having babies that has been my most problematic area, so it will be great to see in a few months time just how this game helps me.  At the moment I am showing no signs of boring of the game, I feel I am growing in proficiency with my dancing and so this spurs me on to do harder routines.

I love music and it's the music that keeps me inspired and upbeat when playing this game; with hits from Enrique Iglesias, Don Omar, Sean Paul, Bob Marley, Tiesto and much more there is something that will appeal to everyone.  The fitness instructors in the game that guide you through the dance moves are all based on real-life celebrity Zumba instructors, so I'm sure a lot of their real-life vibrancy has been captured in this Wii game.

With over 30 different dance styles to pick up it will take a long while to bore of this game.  Since getting the game I have played around 3 times a week (I do have to battle with my 10 year old son for use of the Xbox otherwise it would probably be more).

At the moment I am still working with the low-intensity routines, but each time I play this game I feel that much more adept.

So if you are looking for a fun way to exercise then this game is for you.

I love Christmas, it's one of my favourite times of the year.  Not much can beat the look of excitement on the children's faces for me.  I try and capture as many photos of them as I can at this time of year as it's at this time when I seem to see the childhood magic instilled in their eyes; the look that shows me that they still believe......

In order to get the most perfect photos, I always like to ensure they have a good festive wardrobe.  I always purchase their clothes every year from Next as they have such a wonderful variety.  These are usually my requirements for the clothes:
So the first thing that caught my eye this year from Next.co.uk was this red all in one suit.  It was the perfect fit for my four year old, and more importantly on freezing cold days it keeps him as snug as a bug in a rug.  The fact that it covers all the legs and is so padded keeps him ultra cosy and the fur around the hood keeps the cold air from his head.  Priced at around £26-£28 I thought this competitively priced for how cute it looks and how well it fits its purpose. 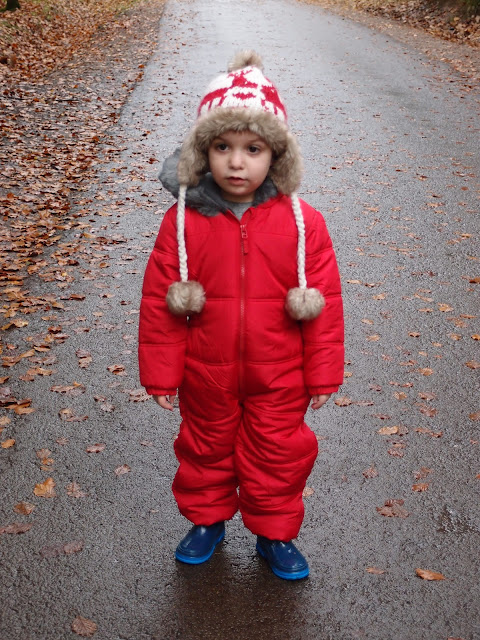 To accompany the snugly all-in-one suit I chose the Reindeer Fairisle Pattern Trapper.  In the Next catalogue you will find this in the women's section, but once I laid my eyes on this hat I had to have it for him.  I think you'll agree it goes superbly well with the red all-in-one.  It adds a festive feel to the whole outfit.  It just goes to prove what a unisex hat it is; it can be worn by boys or girls.
Since I purchased this Reindeer trapper for him it's no exaggeration to say that we get comments daily on what a lovely hat it is.  The knitted reindeers add a traditional festive feel and the faux fur features add warmth to the hat.  The fact that the hat is so long keeps my sons ears lovely and warm too, so I don't need to worry about the cold wind blowing in his ears. 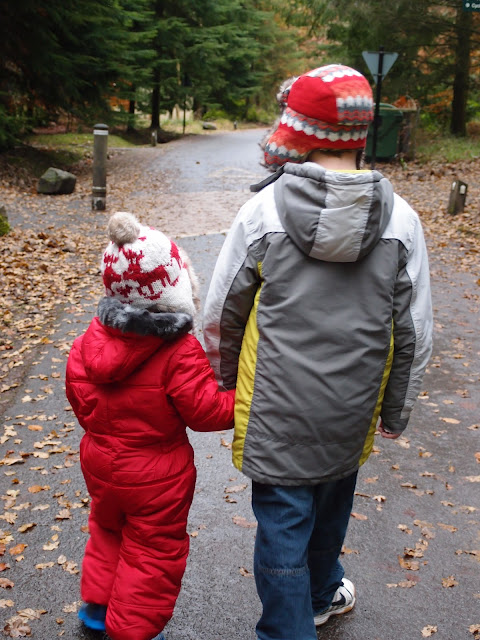 The hat has lovely detailing  and always attracts lots of comments.  Today has been a particularly windy day and my son made me laugh as the baubly bits on the hat were flying out behind him; he reminded me of Pippy Longstocking. 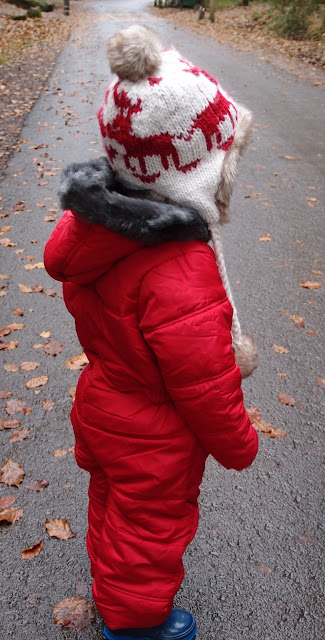 Ahh just how cute does this outfit look on him? 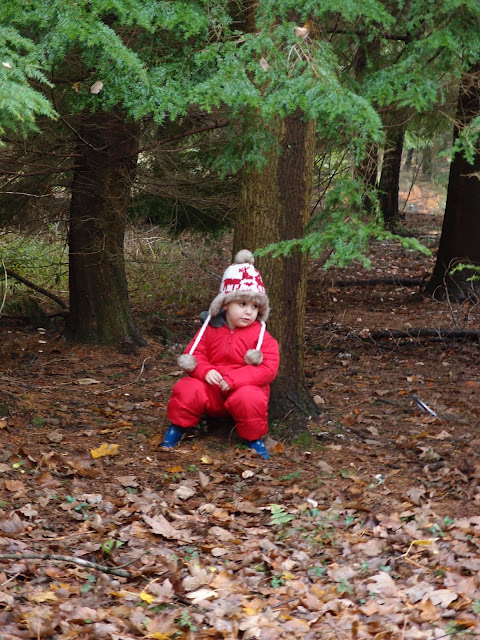 Next up was this gorgeous 'I heart Santa' top.  I liked this top because of the fact that the heart was composed of a fairisle design and yet the top also managed to maintain a modern feel by using the word 'cool' and placing a heart instead of the word 'love'; which is what we do in today's tech-friendly society.  The top is made of 60% cotton and 40% viscose so it is slightly warmer than just cotton alone.  The heart part of the top is slightly raised and has the feel that the heart has been sewed  or stuck on the top.
The top had a really nice fit and is perfect for lounging about in over the Christmas period as it is so comfortable. 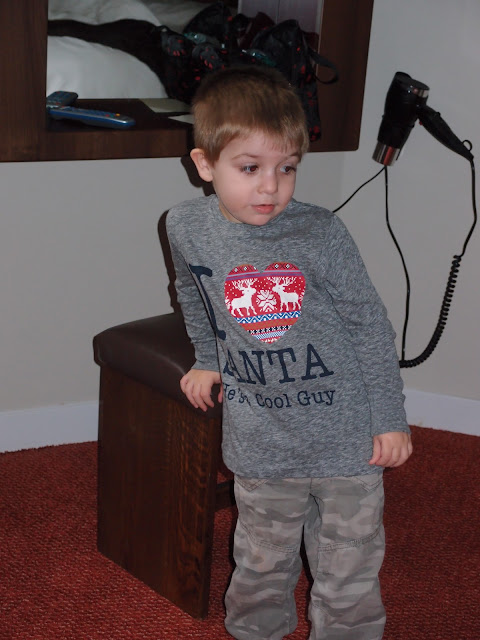 For smart Christmas Day wear I had to look no further than these stunning tartan shirts, I loved them so much I couldn't resist purchasing one for my four year old and ten year old.  Don't they look great in matching shirts?  This is what they will be wearing on Christmas Day. 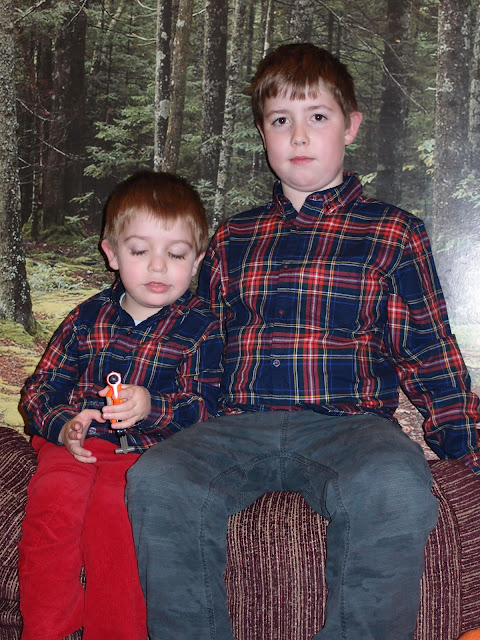 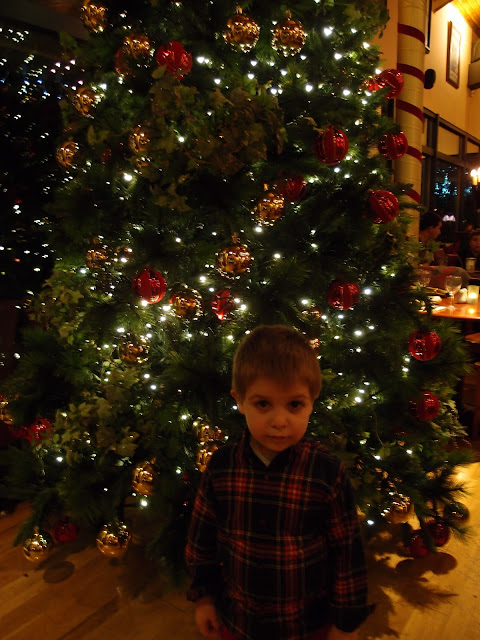 No Christmas is complete without a frosty looking reindeer jumper; this one looked the part and was also really comfy (not itchy like some jumpers can be). So we had no problem with my son wearing it as you can see! 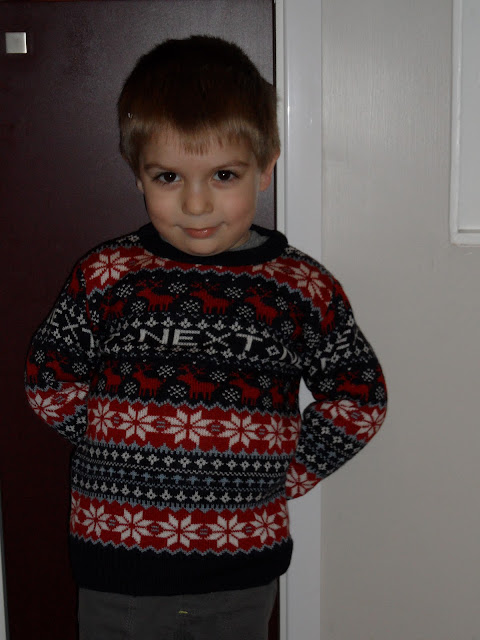 Boys love monsters and when you are trying to get them to stay warm, there's no better option than to dress them as a little monster.  So adorable..... 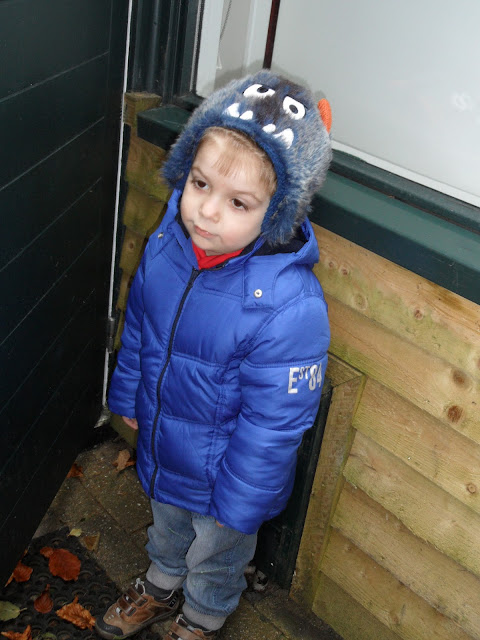 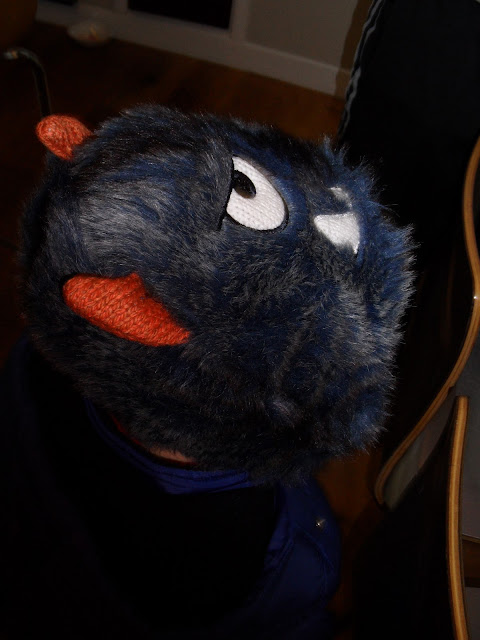 That's the kids sorted, but for myself I have created my own Pinterest board of what I would love to wear over the festive period.http://pinterest.com/bubbles1982/festive-fashion-from-next-womens/

And of course we couldn't leave out my husband so here's his Pinterest board  http://pinterest.com/bubbles1982/festive-fashion-from-next-mens/

That's us sorted for Christmas thanks to Next!  Anyway, we are entering this blog post in to the the wonderful Northern Mum's competition.  The challenge was to illustrate how you would style your family for Christmas day.  You can find more information on this challenge by clicking here http://www.northernmum.com/2012/11/competition-win-500-next-vouchers-perfect-christmas-outfit/

Posted by Sarah Cooper at 08:45 No comments: