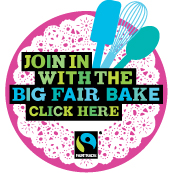 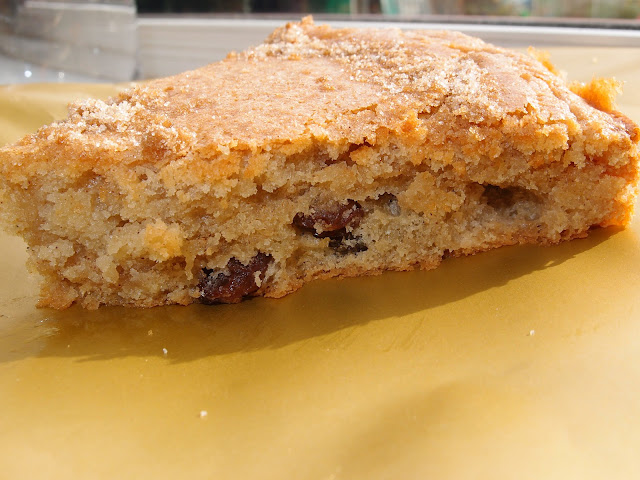 This weekend we joined in the Big Fair Bake Challenge. Baking with Fairtrade ingredients is one easy way for everyone to make a difference to millions of people who desperately need a better deal from trade.  Without a fair price for the crops they grow, many farmers struggle to support their families.  Fairtrade offers farmers and workers the safety net of a fair price today and a little extra to invest in projects which benefit the whole community, such as clean water, education and health care.

The Big Fair Bake is part of the year-long Take-a-Step campaign, which aims to get the UK to take a total of 1.5 million steps for Fairtrade in 2012, a step for every farmer and worker in the Fairtrade system.  A step can be small, like switching your tea to Fairtrade or baking with Fairtrade ingredients or a larger one like holding an event.  Every single one counts, because together they lead to life-changing projects in developing countries.

As part of the campaign, Tots100 invited bloggers to develop a baking creation inspired by one (or more) of the following Fairtrade certified ingredients: 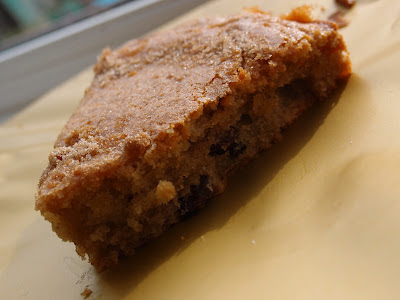 I supported the Fairtrade cause by baking my creation; which is Fairtrade Cinnamon and Raisin Cake.  This is a thoroughly gorgeous cake that is very moist and tasty.  The cinnamon and raisins work perfectly together and it is the perfect cake to accompany a cup of Fairtrade tea.

To make the cake you will need:

Step 2: In a bowl mix together the Fairtrade ground cinnamon, Fairtrade caster sugar and Fairtrade brown sugar; set aside.

Step 3: In a separate bowl cream together the butter and 4 tablespoons of the cinnamon sugar (that you mixed in step 2).  Keep mixing until light and fluffy.  Then beat in the egg, soured cream and vanilla extract.  In a separate bowl mix together the flour, bicarbonate of soda and salt.  Then add in to the creamed mixture and mix well.

Step 6 : Enjoy with a cup of Fairtrade tea!


The cake is simply delicious!  It is perfectly moist with a delicious sugary cinnamon crust!  The raisins adding just the perfect blend of fruitiness.

It's a nice feeling to think that we are supporting the Fairtrade cause in some small way as well. 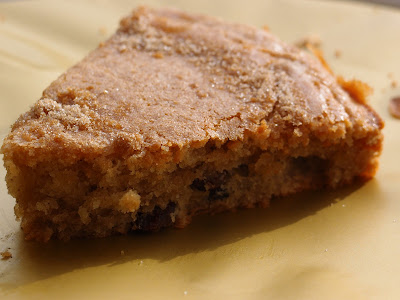 My little boy enjoying the cake! 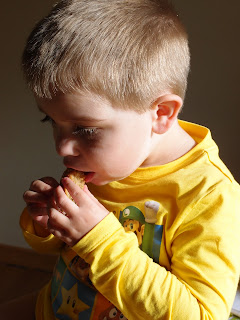 To find out how you can help please visit http://step.fairtrade.org.uk//get-involved/campaign/the-big-fair-bake/ 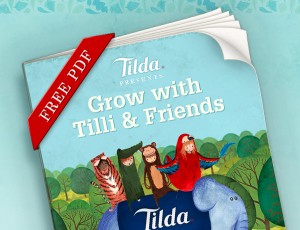 Have you tried Tilda Kids rice yet?  You should! They have a delicious range of rices which are perfect for teaming up with a wide range of meals!  They combine lots of vegetables and are really tasty.

Recently we discovered that Tilda Kids were running a story competition where children had to write an adventure story about Tilli and her friends.  In case you are wondering who Tilli is, she's the elephant which graces the packs of Tilda Kids rice.  This story competition certainly provided "food for thought" for my oldest son and it was a lovely activity as we sat down together and discussed possible story plots.  In the end he decided upon writing about the children trying to cook a lovely meal for Tilli, to repay her for her kindness in always providing them with lovely meals.

Tilli had made so many delicious meals for the children that they decided that it was time to do something nice for Tilli. What better way to repay her kindness than to cook her a tasty dish! Of course the children were too young to do real cooking with hot ovens by themselves so they gathered together some of the things that they knew Tilli loved to eat and began to make her a meal that didn’t need cooking. Being an elephant this was what she liked best anyway.
So the children found some grass and leaves that were healthy for Tilli and helped Tilli learn to laugh and grow and play. For they realised that it wasn’t just important for them to eat good foods but Tilli needed to eat good elephant foods too.
When Tilli saw what trouble the children had gone to for her she was so pleased and said that she would create more tasty Tilda dishes for the children tomorrow. Everyone was happy!
And so we sent off the email with his story and a few weeks later we were absolutely thrilled to receive an email informing us that he won!  The prize was a wonderful family pass to a zoo of our choice!!  We will be blogging about our special zoo adventure in a few weeks time, so keep your eyes peeled!
In the meantime the lovely PR lady who I passed a few emails back and forth with asked me whether I had seen the new ebook available from www.tilda.com.  I had a look and thought it was brilliant, so I thought it was worth writing a little blog post about.
The e-book is called 'Grow with Tilli & Friends' and it's a recipe and activity book.  You can visit www.tilda.com and print one off, and there's activities suitable for everyone in there.  The book is lovely and colourful and contains tons of fun ideas, so it might even be worth you laminating the book so that you can keep it in good condition for the amount of times you will want to use it. 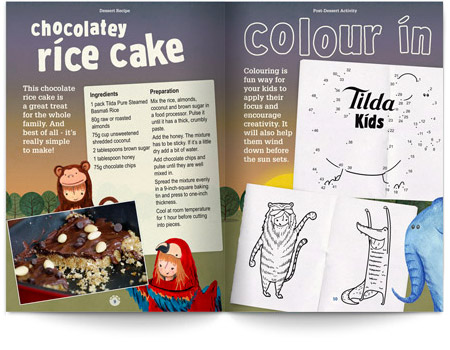 What I liked about the book was that it featured recipes that I hadn't necessarily come across before; have you ever heard of a rice cake before?  I haven't but I intend making one this weekend.  Things like the dot-to-dot pages were also a great hit with my sons and I loved the pages with songs on for the children to sing too.
One of the pages featured a recipe called 'Kiddy Korma' and it went down a treat with everyone, the Tilda Kids 'Mild & Sweet Curry rice' providing the perfect accompaniment with the delicate blend of vegetables.
Yum! Kiddy Korma! 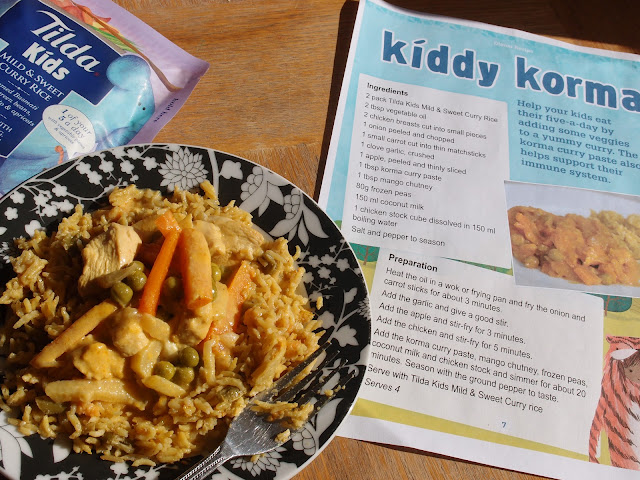 The recipe used lots of fresh fruit and veg like carrots, peas, onions and apples which made the korma naturally sweet; it was delicious! 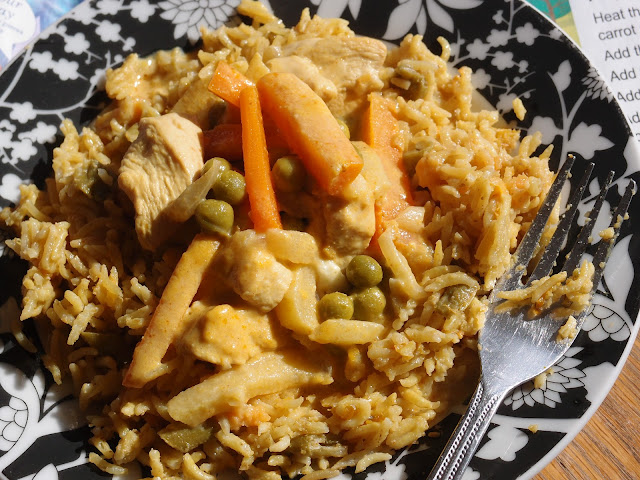 My little boy thoroughly enjoyed doing some of the yoga moves featured in the booklet, and we are planning on making the 'Fruity Rice' for breakfast tomorrow! 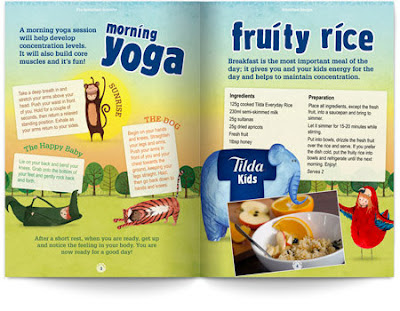 I was so impressed with the e-book that I thought it would be fun to make a little video of my youngest son (my oldest son was too camera shy) partaking in some of the activities.  Have a look and see what you think .......

To download your copy of the book please visit http://www.tilda.com/kids/kids-ebook
Posted by Sarah Cooper at 12:55 No comments:

My very own Superhero! #kodakavengers

Crash!  Pow! Bang! Whack!  I have a big superhero fan in my house, and if I had a pound for each time he wanted to get changed in to a different superhero costume I would be a very rich woman by now!  In our collection at the moment is Spiderman, Superman and Batman; we also have some Incredible Hulk fists which proclaim something along the lines of "Don't make me angry, you won't like me when I get angry" every time you swing them.  Which actually results in the fists getting swung around a lot more!

Anyway, when I read about this challenge from Britmums and Kodak I was only too eager to take part.  It actually gave us a lovely activity for the weekend, although we did have some difference of opinion.  My three year old insisted that under no circumstances was there going to be any elastic or string passing through the holes of the masks, he seemed to think that it would ruin them by passing string through.  So we had to go with the hand-held option.

Anyway, before that we had other things to worry about; clearly I have printer problems as this Incredible Hulk mask came out BLUE!!!!  Much to the disgust of my three year old!  Although after much persuasion he started to think it was really cool!

I actually think a blue Incredible Hulk looks quite good!   This was the best superhero pose my little one could do what with insisting that he had to hold the mask on. 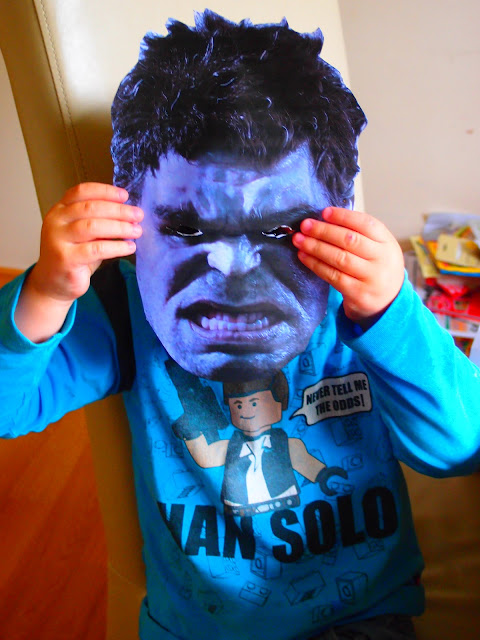 My little boy loved using these masks; it was the next best thing to the costumes for him, and we now have Captain America, Iron Man and Incredible Hulk costumes on his Christmas list for Santa.


Awww!  What a sweet Captain America! 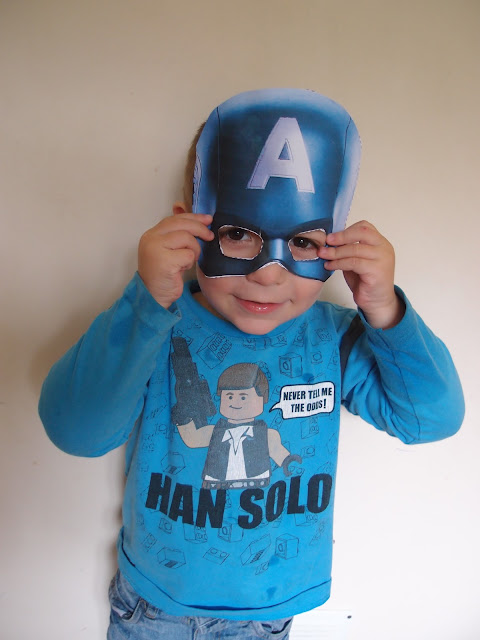 Lastly we have a rather spooky looking Iron Man! 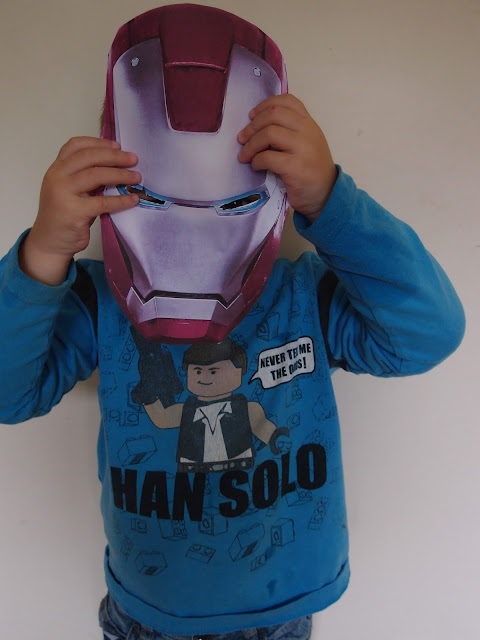 And of course we couldn't blog about superheroes and not include a pic of the Spiderman costume!  I'll even let you in to a little secret - Spiderman's favourite food seems to be chocolate biscuits! 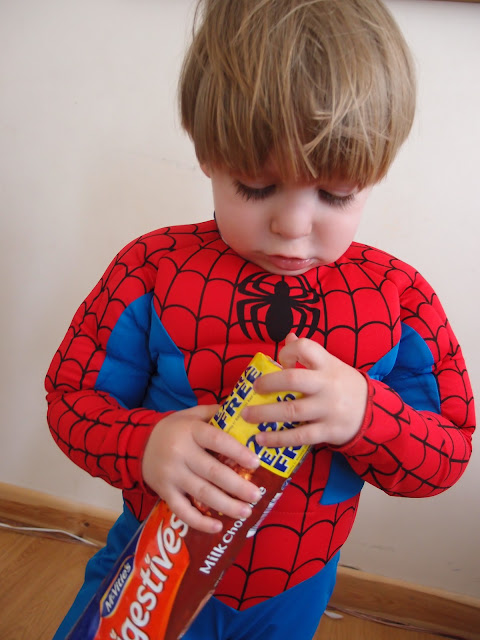 And so we had a fun afternoon perusing these masks, even if my printer did turn the Incredible Hulk blue!

This is a post for the #kodakavengers Linky Challenge – if you take part you could win £500 or one of 3 Kodak Hero 7.1 All-in-One printers plus Marvel’s Avengers Assemble on DVD.
The Linky celebrates the power of Super Heroes as well as the DVD and Blu-ray release of Marvel’s Avengers Assemble on 17th September, along withfree printables for creating your own Super Hero adventure at home from Kodak. 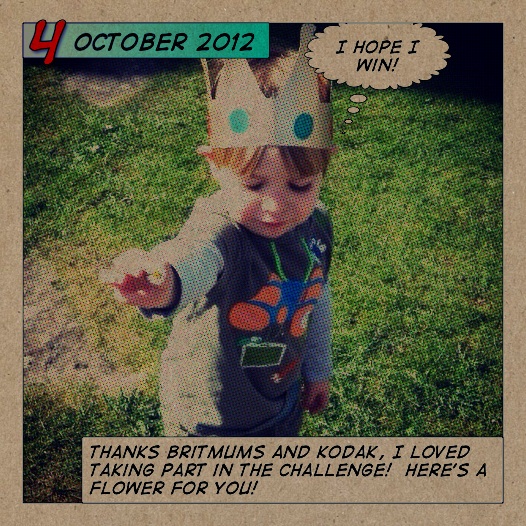 This Linky is sponsored by Kodak, which has created free Marvel’s Avengers Assemble printables you can print at home, including character masks, posters and party packs including invitations to create your own Avengers themed party! Plus with Kodak you can print as much as you like without worrying about the cost of ink. With the lowest total ink replacement costs in the UK you can replace all your inks for under £23*.