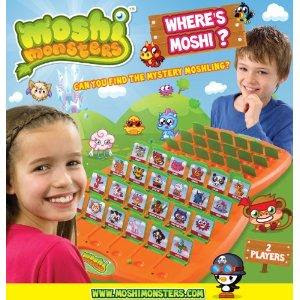 My eight year old son loves Moshi Monsters and so we were keen to check out this game by Vivid Imaginations...

The game incorporates every aspect a child could want. It has the Moshi Monster branding to draw them in, it has a quick set up, simple rules to the game and the game lasts just the right amount of time to hold their interest.

This is most definitely going to be the must-have toy over the Christmas period as the Moshi Monsters continue to get bigger and bigger. And because of the fact that the aim of the game is rather timeless (finding your opponents character by asking questions until you eliminate all but the right one) this is a game that won't just be a fad.

I was quite impressed with the structure of the game board, as it wasn't too flimsy and as the game retailed at £9.99 I didn't expect too much. We have had several games of this since we first had it and we haven't tired of it yet. It's quick to set up and quick to put away.

The only minor adjustment I would make to this game is the part where you have to select your chosen character by placing a green pin in front of them. The only problem with this is that when you have flipped your character down as part of eliminating your opponents' character, if you are not familiar with all the characters then you tend to forget what character you are. So I would have liked a card to set in front of me instead. And also I am worried that the pins will inevitably end up lost. But for future editions of this game, this is a suggestion I would like to put forward.

Nonetheless, for the price of this game we are very happy and will be having lots of fun-packed winter evenings thanks to Vivid Imaginations. Excellent!

For more info please visit www.vividimaginations.co.uk
Posted by Sarah Cooper at 05:09 No comments: