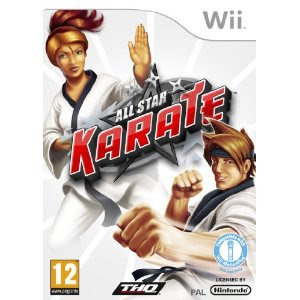 All Star Karate by THQ is great for Dad’s who want some time by themselves to chill out. Alternatively it is great way for dads to bond with their teen kids as this will leave them able to challenge players to punch, kick and chop their way through the game with play features based on real karate moves. With optional Wii MotionPlus™ compatibility, the game offers a true full-body experience by allowing players to experience the life of a karate trainee who is under the guidance of a wise, but humorous sensei, and is on the path toward attaining a black belt, the highest achievement level in karate.
In All Star Karate, players will follow the life of a young, martial arts novice whose noble attempt to save an elderly man from a pack of ninjas brings him face-to-face with a true karate master. The sensei, a cantankerous old-timer, offers his services and teaches his new protégé the proper techniques and disciplines of karate and guides him toward achieving the black belt. In single-player, Career mode, players will execute and master various karate moves utilizing the Wii Remote™ and Nunchuk, or two Wii Remotes, in order to attain the seven different colored belts or achievement levels in karate, including the black belt. Additionally, players can show off their hand, kicking and blocking techniques by sparring with a friend in Challenge mode or by creating their own move sequences to perform with the Kata Editor.

Dad says: I loved this game as a Father’s Day gift idea as it’s perfect for when I come home from a long stressful day at work and need to unwind. I never realised how karate releases the stress of the day. It was particularly enjoyable to play the mini-games with my son who had us chopping and punching away. It’s also a relatively good way to burn off those extra calories as all that chopping action soon has you breaking in to a sweat.
Posted by Sarah Cooper at 14:23