It's hard not to get swept in to 'Toy Story 3' fever. In fact I quite enjoy being swept in to it. Keep an eye on my blog over the next few weeks as I review all the latest Toy Story products and also transform my little boy's bedroom in to a 'Toy Story' room. I don't know who's more excited - me or him?

First up to be reviewed is the Toy Story 3 game for Xbox 360.


Join Woody, Buzz, Jesse, Bullseye, Rex, Slinky, Ham and a host of new toys in the new Toy Story 3 video game from Disney Interactive Studios available on all formats on 16 July 2010. Inspired by the hugely anticipated new film players can either play as the famous characters and follow the adventures of the movie or create their own Toy Story universe in Toybox mode on the Xbox 360, Playstation 3 and PC.

Toybox is a virtual world full of toys, bringing aliens, cowboys, space rangers and dinosaurs together and allowing players to customise characters, their environment and create their own Toy Story world. As players compete in the mini-games in Toybox mode they earn gold coins which can then be spent at Al's Toy Barn on more toys. 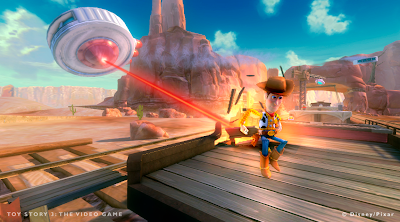 Woody avoiding laser in train rescue level.
In the film Andy is all grown up and his toys are sent to a nursery. In the video game Story Mode (across all platforms) players follow the film's action and help the toys escape the nursery. There are also imaginative play modes on the Playstation 3, Xbox 360 and PC formats where you get to play as your favourite character in an exciting adventure such as Woody and the Runaway Train and Buzz in Star Command.

In addition on the Nintendo DS and PSP there are a series of mini adventure games including Rock Climbing with Woody and Lotso's Orders with Buzz.

This must be the first ever computer game that me and my seven year old son have actually squabbled over to play. Any cries of "I'm bored" have been banished in my household since getting this game. 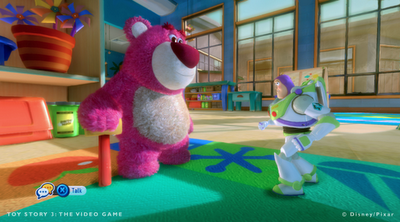 Lotso bear preventing escape from the daycentre.
We were very excited to get this game as we love the Toy Story films, but at the back of my mind was a nagging doubt that the video game wouldn't live up to the film's fantastically high standards. As I took the game out of its packaging my seven year old quivered with the anticipation of opening it. From the minute we turned the game on we were immediately drawn in. All the visual delights were there of the film; such as the colours used and the characters looking exactly as they do in the film. SO it was almost like getting an extension of the film that we hadn't seen before. 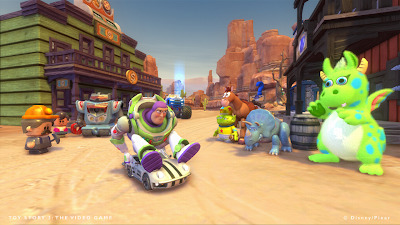 Buzz Lightyear riding a sports car in Toybox Mode.
I can tell you that my son was so enthusiastic about this game that he even started to write my review himself. He loved the fact that each level was totally different; from riding horses, to collecting orphans, defeating Zurg and saving aliens. Some of the levels were even taken from the computer game that is played in the Toy Story movie. He has been totally absorbed in it and unlike some games there have been no moans or cries to look on www.gamefaqs.com for help.

Each level had the right amount of challenge to be fun but had adequate checkpoints not to become frustrated. Even if you were not playing the game, it was fun to just sit and watch because as I previously said the game carries the same magic that the movie does.

There are two modes of play:

Toy Box mode - which has tons of different engaging missions to participate in.
Two player co-operative mode - which allows two players to share in the fun.
It was brilliant because some levels we knew what to do because we had seen the characters in Toy Story act it out. I would really recommend this game for those rainy days over the holidays because it is a game that the whole family will enjoy. My son very begrudgingly let me take turns on doing levels with him. I say begrudgingly because he was enjoying it so much. 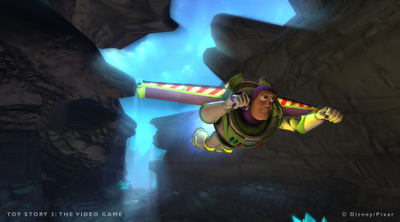 To infinity and beyond!
There's also lots of on-screen advice on buttons you need to press to perform actions, so you are never left frustrated.

Master Craftiness age 7 says: The levels are amazing fun and the Toy Box mode is really great; lots of things to buy and you can play as 3 characters - Woody, Jessie and Buzz. You can also ride Bullseye and fly with Buzz

A definite 10/10 for us. The fact that when we are walking around a huge fun park with my son and he is saying that he can't wait to get home to play on 'Toy Story 3' made me come to this conclusion.