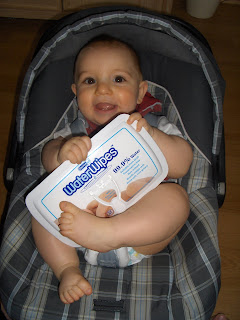 Wet-wipes or cotton wool?? It's never been much of a decision for me previously as since Bailey has been born he has suffered terribly with eczema. His face and bottom were so bad that they became infected and started badly weeping. I'd never realised how hard it was trying to stop a baby touching his face until we endured the ordeal. For two whole days until the weeping sore on his cheek healed and dried up, I almost had to sit with him constantly otherwise he was gauging at it with his fingernails. I think it was one of the most stressful experiences I have been through with him. So mainstream highly perfumed baby products have always been a no-no for him.


It's also made a bit of an issue of when we take him out anywhere on a journey as if he requires a nappy change then the only option is wet-wipes, which inevitably brings him out in nappy rash. The way we change him at home is solely with cotton wool and water and this is something we thought we just had to put up. However...................


Surfing the net- I found that a company producing something known as 'Water Wipes' were wanting people with babies to test them and give feedback. I emailed the lady and offered to review. It was just a few nights previously I was thinking to myself why can't there be a product that is just soaked in water, but then I thought there must be some hygiene issue to this as there was none currently on the market. Lo and behold two nights later and I see this product online. Eager to see whether this product was any good I got stuck in to testing.


Before I tested on Bailey I wanted to do the 'Sarah Test' on them first. I say the 'Sarah Test' because I have exceptionally sensitive skin and the slightest thing brings me out in a rash. So arriving out of the shower with panda eyes and remnants of make-up left on I set about using the wipes on my face. I was very pleasantly surprised - I know these aren't targeted as facial wipes but maybe I have found a secondary use for them. They were so soft and thicker than normal wipes that it made it really easy to wipe make-up off.


If there was one thing initially that would have put me off this product it would have been the price. £4.49 for a pack of 72 wipes. But after seeing how much thicker and kinder to skin they are, that's two added bonuses right there. The fact that they are thicker means you only need to use one wipe which makes them in fact more economical than normal wipes besides having the glorious texture which is great factor.


So after testing them on my own face, I waited until Bailey had done his worst in his nappy before trying them out on him. I'm happy to report that these wipes worked perfectly on him. One wipe was large enough and thick enough to clean up his whole bum. Unlike other wipes I didn't feel my fingers were about to slip through the wipe either. They're great because they are made up of 99.9% water and they remain moist because they have a special mechanism on them called a 'Keep-Moist Dispenser' which locks out any air.


So why else am I raving about this product??


Better still - there was no reaction on Baileys bum! This is a huge weight off my mind as I can now leave the house with baby in tow with the knowledge that I have a little wonder in my bag - the convenience of wet wipes but the purity of cotton wool and water! So everything is peachy (literally) and we will definitely be buying these wipes in future! 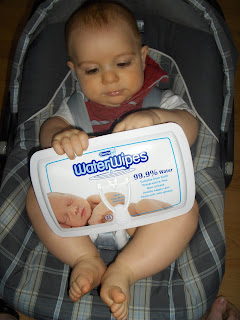 "Hmm, we'll definitely be buying more of these Mum"