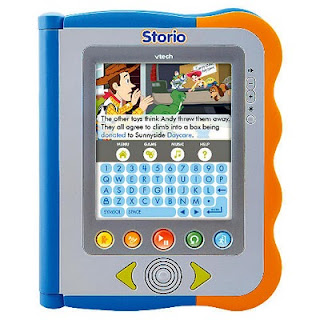 Vtech STORIO is an interactive animated story teller aimed at 3-7 year olds, which encourages kids to read along with their favourite characters whilst developing their understanding of letters, vowels and phonics. There's even parent friendly extras to help monitor their development.

We were sent the Vtech Storio to review and so here's our honest opinion:
We were first drawn to the Storio because of our love for 'Toy Story.' The book that comes in the Storio package is 'Toy Story 3' and so we couldn't wait to test it out. We pressed the 'on' button and immediately we were simply amazed by the quality of the film accompanying the story. It was like having a little TV in our hands. I love reading gadgets, I'm the proud owner of a Sony Reader; but I could say in some ways the Storio impressed me even more. Not only a story book but a running cartoon too!
To add to the delight of the above, we could even personalise the Storio with my sons name and play reading games. My two sons are nearly 2 and 8 and it was a constant fight between them who could use it first. At the moment my youngest son can only listen and watch but I am sure this will ease him in to the world of reading and really encourage him to want to read.
The touch screen was brilliant to use and you could either use it with your fingers or with the stylus pen that comes with the Storio. The fact that each word was being highlighted as it was read out made it great for my children not only to learn the words and see how they were pronounced but also to learn the tone of voice that is used when something exciting is happening. A skill that can often be ignored. Another brilliant factor was that if there was a difficult word, then they could just tap on it and up would pop the 'story dictionary' explaining what the word meant. They also really seemed to like the facility of being able to virtually turn over the page.
The reading games were a big hit with the children too and are a great tool for finding out how well your child comprehends the story.
I'm also surprised at the fact that we have had the Storio for around six weeks and still haven't had to change the battery! Putting the Storio on a dimmer light setting certainly seems to conserve the battery life and prevents the Storio from devouring batteries.
Our overall opinion:

Brilliant! The Storio really does manage to bring reading to life in a variety of interesting ways. With the ever expanding library of Storio such as Shrek, Dora the Explorer, Scooby Doo and Disney Fairies we are never going to get bored of this toy.
For more information please visit www.vtechuk.com
Posted by Sarah Cooper at 00:55