It's Science Week between the 15th and 24th of March and Crafts4kids.co.uk have a wonderful selection of kits to make science fun for kids!  Have a look for yourself here http://www.crafts4kids.co.uk/science-kits/c42 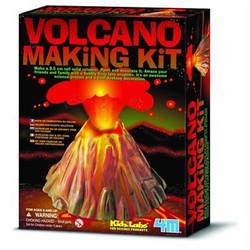 We were sent the brilliant Kidz Labs Volcano Making Kit and it was fascinating to make.  It's a rare opportunity when I get to drag my 10 year old son away from his Xbox, but if you have something like this kit to hand then with a few simple ingredients it doesn't take long to get to the nitty gritty that kids love!

The instructions that come with the kit were very clear and detailed, so each step of making the volcano was made very easy.   The moulding and painting aspect of the kit is great to involve any children who love to get creative.

We've made a video to show how we got along with the kit:


And thereby we learn the destruction a simple chemical reaction can make!


So what did Master Craftiness learn?

Things I have learnt:
Our opinion: This was a great little kit to illustrate how much fun science can be and we both learnt some interesting facts about volcanoes.